Due to a fortunate contact through the Electronic Studio of TU Berlin I went to Donaueschinger Musiktage 2015 being the robot kindergarten worker for Orm Finnendahl's piece AST at most likely the "New Music" festival worldwide.
The festival is curated and organized by the SWR (a regional public broadcasting station serving the southwest of Germany). Traditionally it is held in Donaueschingen, a small town in Baden-Württemberg.
As it is a highly publicly subsidized event and genre of music that is presented there, the whole festival is quite an interesting and diverse place to be in.
An additionally very interesting aspect is, that all pieces presented are premieres!
That being said, I didn't have that much time to watch other pieces, but I made it to those two: The dress rehearsal of Michael Beil's "Bluff" (incredible timing!) and Olga Neuwirth's "Le Encantadas o le avventure nel mare delle meraviglie" (literally big production).
The latter made me miss my train on the way back (which was okay, because I ended up with parts of Ensemble Mosaik).

Berlin based Ensemble Mosaik realized Orm's piece amongst several others in the Donauhallen (one of the many locations used during the festival) and presented it to the public two times (the first one also being a live broadcast).
You can listen to the whole broadcast here. AST begins around 01:06:30.
For a more general overview, have a look here. 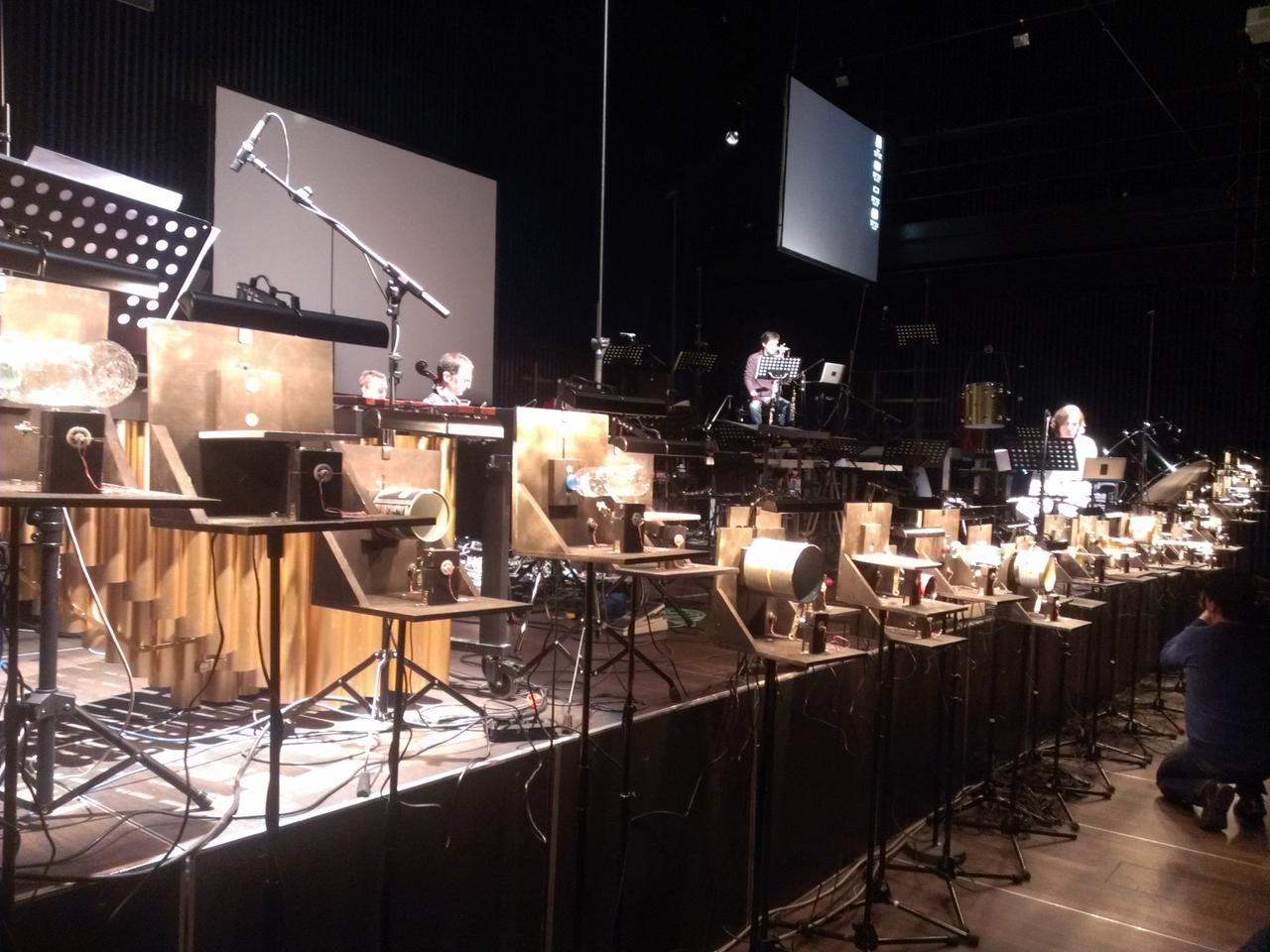 AST is quite a challenging piece to perform, as it not only involves "robots" (designed by Hans Hübner) that bang on different materials and thus have to be "in tune", but also a nifty PureData based setup, that allows all involved musicians to sample themselves and improvise to those samples at certain times, while at the same time gives Finnendahl the possibility to oversee all of their actions according to local and global timelines.
Like all of his newer pieces, its score is written using LISP and sonified by using backends that base on SuperCollider or PureData, while the spatialization is done in PureData.
Sounds like a powerful setup? It is! 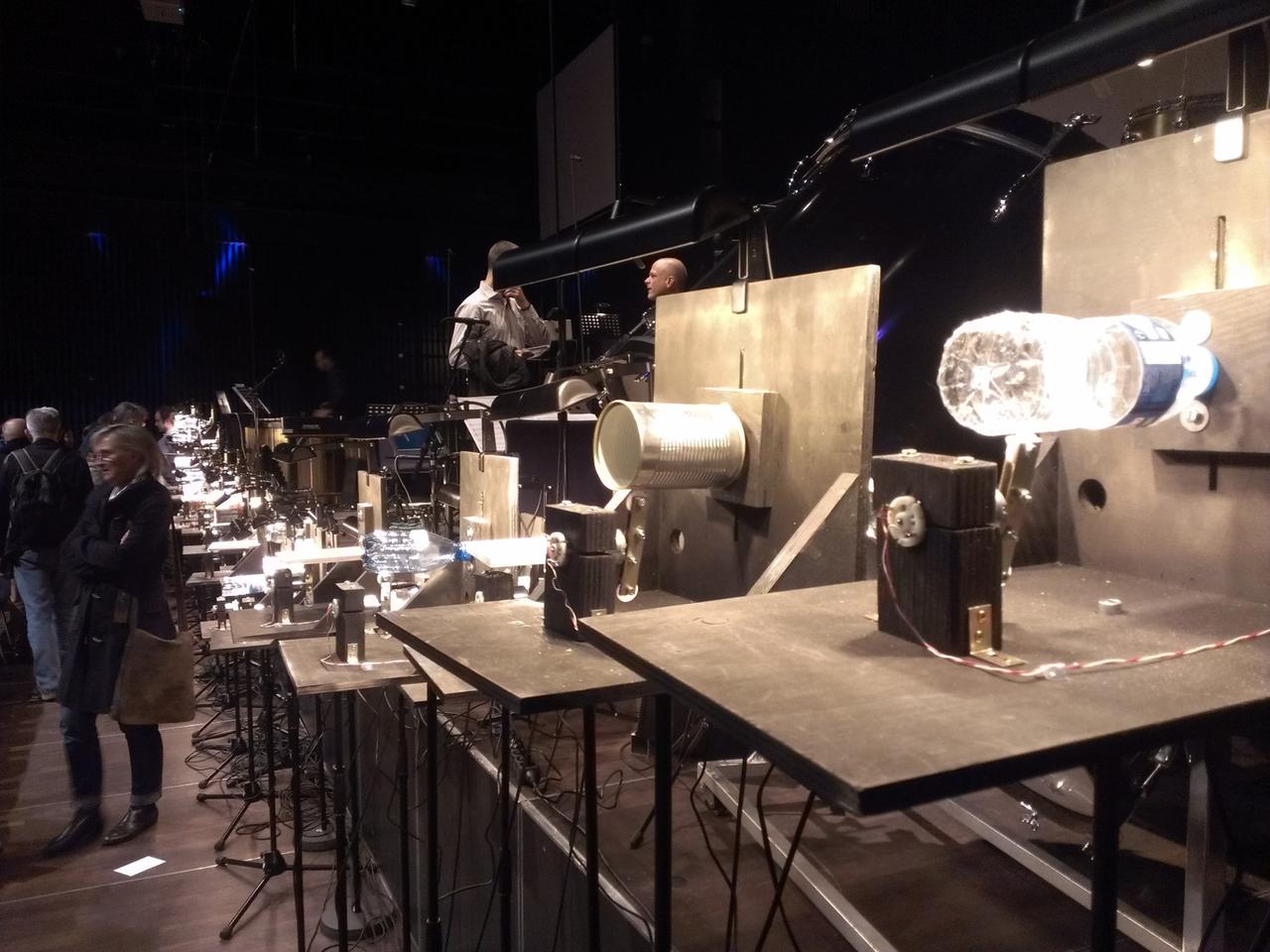 Rehearsals for AST took place in Berlin at Ensemble Mosaik's rehearsal space.
A handful of weird issues had to be worked out during those, including network problems ("Don't ever user WiFi for anything! Ever!"), MacOSX related hickups ("Ah, is that application really closed?") and versioning fun ("What version of the application was it, I gave to you?").
As with all technical setups a methodical procedure is of the essence. I worked out a plan for moving all needed tools and boxes from Berlin to Donaueschingen.
In the end everything worked out rather nicely and I think the piece went for a very good start at Donaueschinger Musiktage 2015! 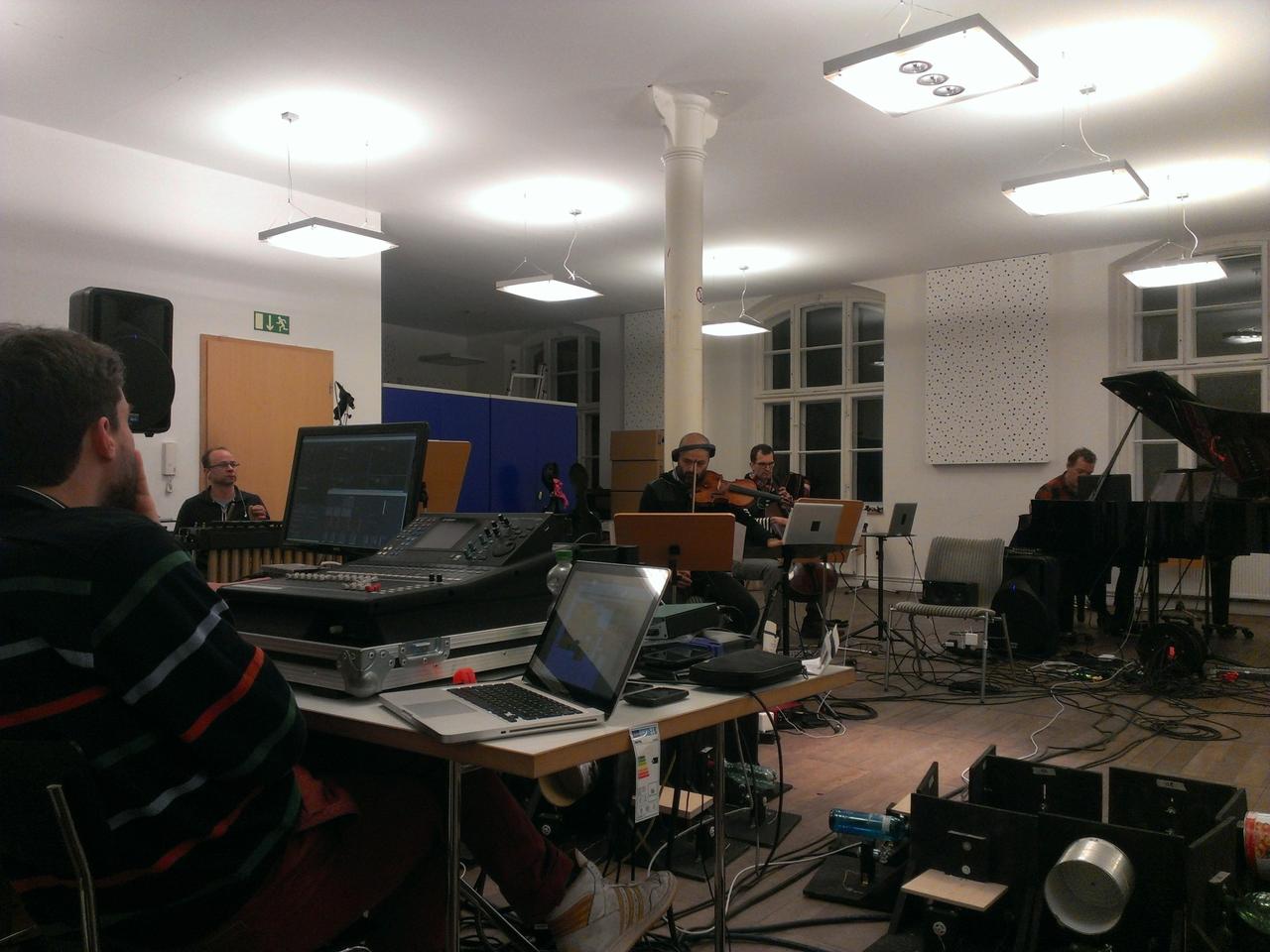 Rehearsal of Orm Finnendahl's AST with Ensemble Mosaik in Berlin

Rehearsal of Orm Finnendahl's AST with Ensemble Mosaik in Berlin

All in all I'm very happy for the opportunity to have worked with such professional musicians as the Ensemble Mosaik and a mindblowing setup as Orm Finnendahl's.
You live and learn.