In the beginning there was one

Last year, when I started building Eurorack, what eventually took it's peak of craziness in building my own suitcase, I got to know the great folks at Befaco, a Spanish group of friends that started designing and eventually selling their own modules.
Back then, the NK still existed as a venue and it was host to many concerts alongside the DIY workshops of Befaco (taken care of by Florian Hanisch).
When it closed down, I had already spent some time at c-base and found it to be a great place for synthesizer workshops (I mean, what better place for synths is there, but a space station? Well, maybe cats and synthesizers at a space station!).

Just how it is with the meeting of like-minded people: They tend to find more of a kind!
Befaco are long time friends with Victor Mazón Gardoqui, who just started to design his own modules under the moniker 000 and spent workshops together with Rebel Technology at London Hackspace.
All of these people are most excellent, provide open hardware and I am very happy to now have them over at c-base for doing their workshops!
So by the end of 2015, 000, Befaco and Rebel Technology started as a joint effort under the name Modular Synth Selbstbau Workshop. 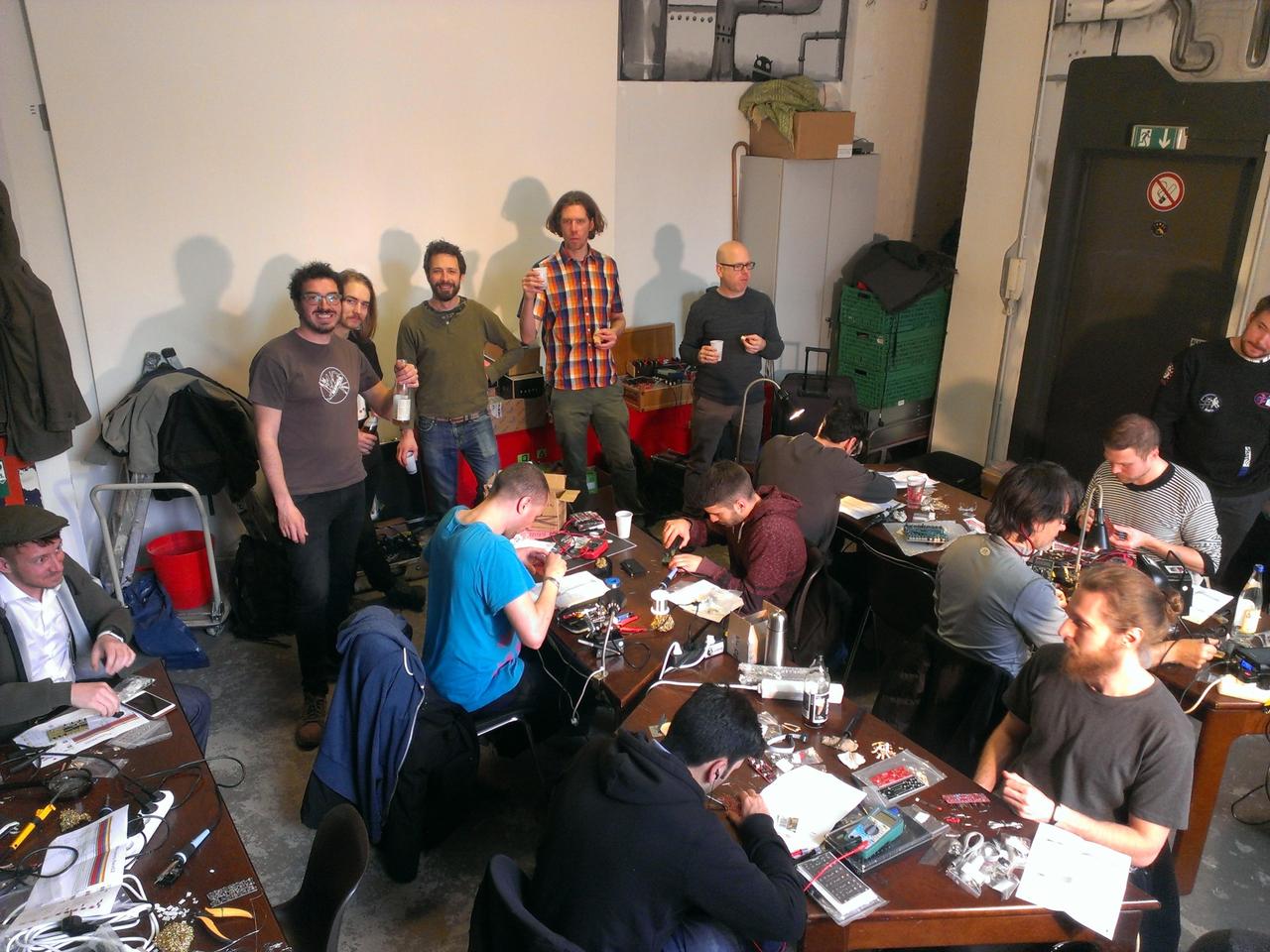 Last weekend for the first time the three were in Berlin at c-base at the same time (due to Superbooth), accompanied by the great folks of Bastl Instruments and 4MS.
Although everyone was pretty much destroyed from three days of listening to noise and talking to synthesizer people, they still managed to squeeze out a workshop day with all vendors combined! Hence, the "Überworkshop".
I somehow finished the grandPA and LITTLE NERD of Bastl Instruments (really looking forward to spend some time with those the coming weeks!) and a power bus for the soundlab (gotta start somewhere, right?).

Then this happened:
Some short notes on the burning laptop: 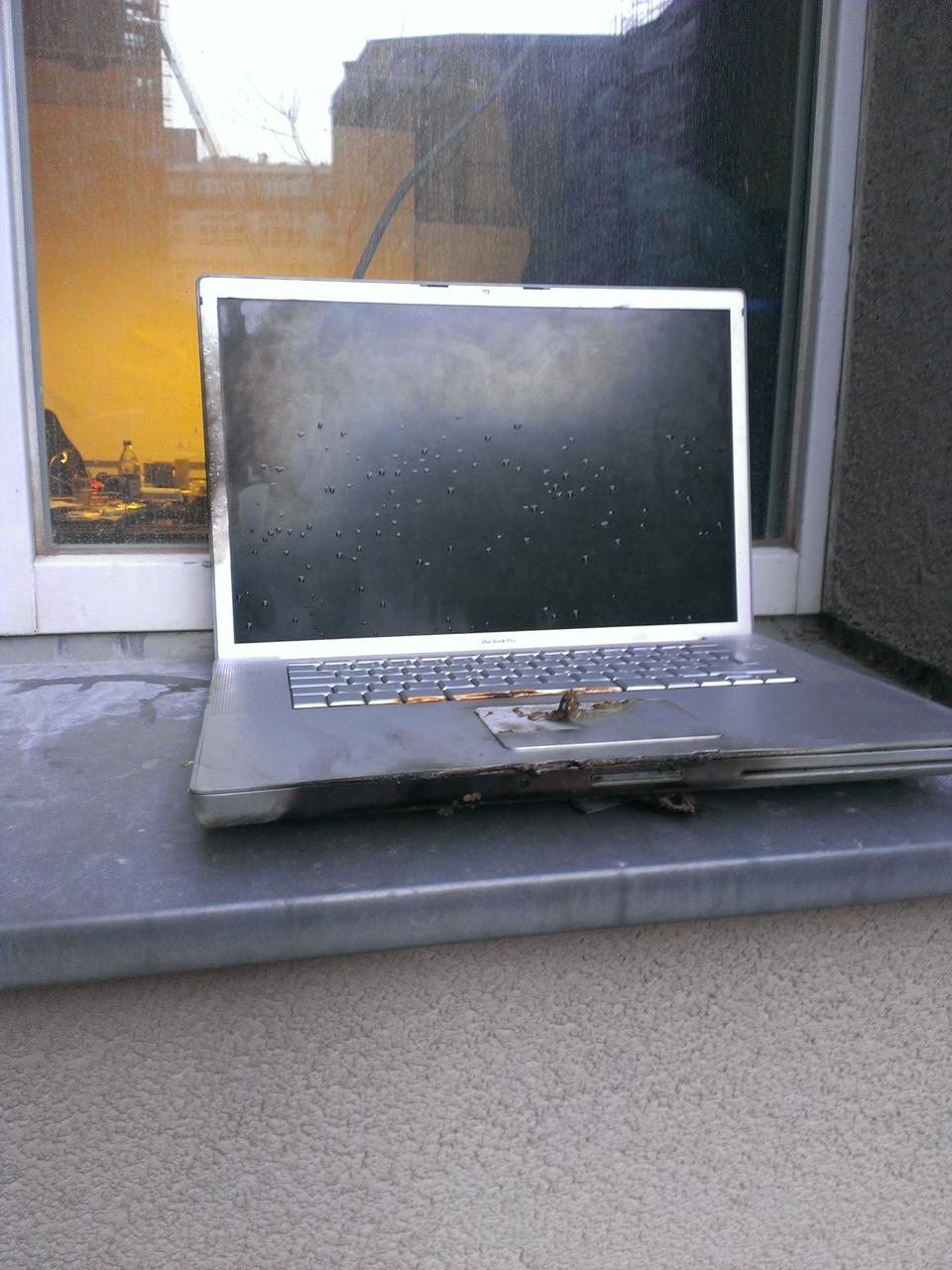 On Sunday, 5th April 2016 at approximately 19:27 this MacBook gave its life for a future without Apple products.

Poor Martin of Bastl Instruments lost his laptop (and I heard his iPhone died just a week later).

Not even the suicide of a MacBook could keep us from having a nice showcase evening together with Dan Snazelle of SnazzyFX and the Modular Synth Selbstbau Workshop crew afterwards!
As special (self-invited) guest, we had der Warst aka. Simon Schäfer (another very interesting acquaintance from 2014's Bended Realities) with his awesome DIY circuit bending hardware. 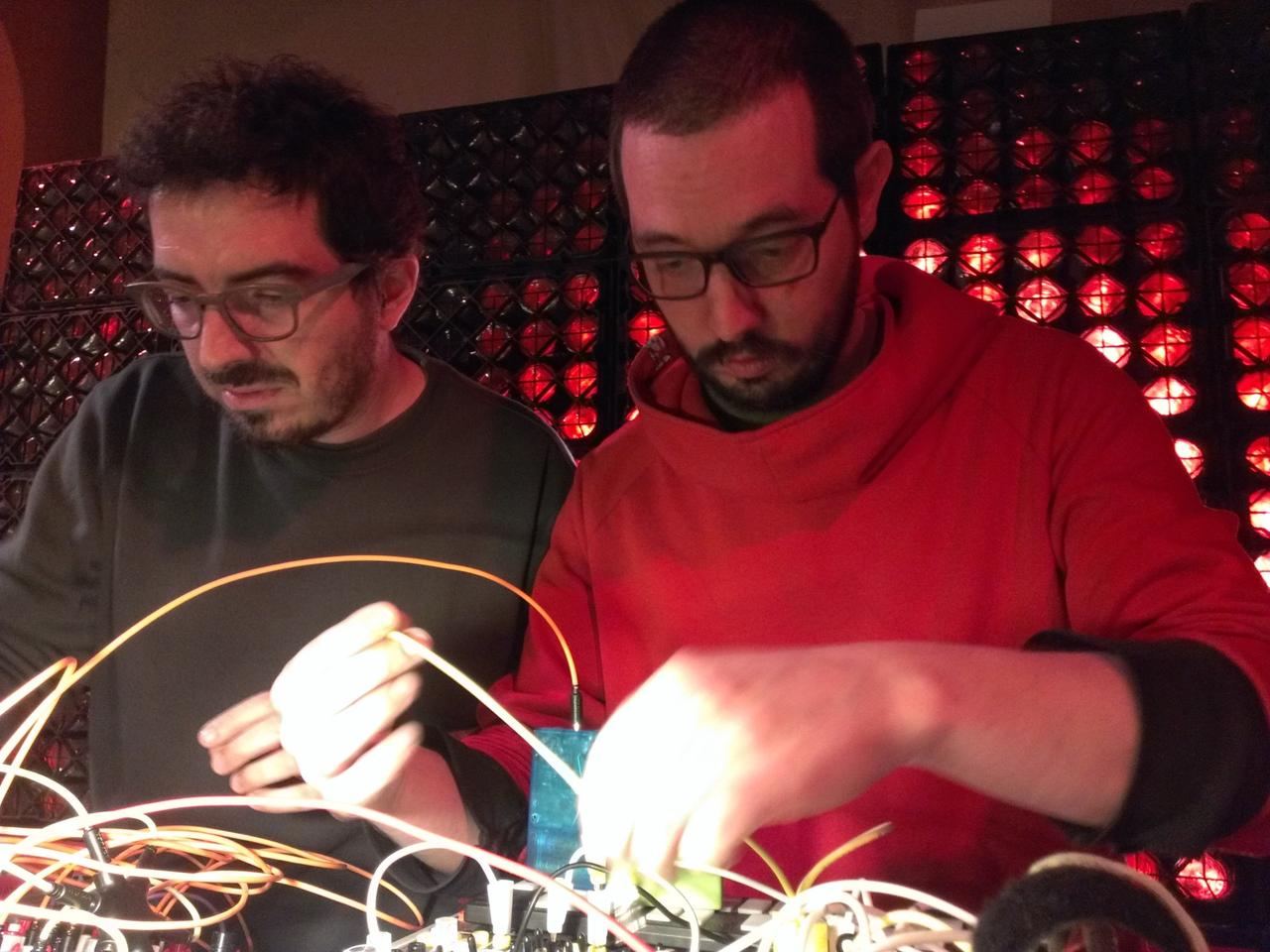 Diego and Manu of Befaco showcasing their equipment.

Befaco did a nice set, of which I unfortunately only recorded beginning and end (the missing chunk is barely noticeably though ;-) ) due to running out of space on my Tascam DR-40. Next time I'll be better prepared!
In return I don't have a picture of Martin Klang (Rebel Technology), but hey... a nice recording will do:
With 000 it's unfortunately the same, although they played the longest set: 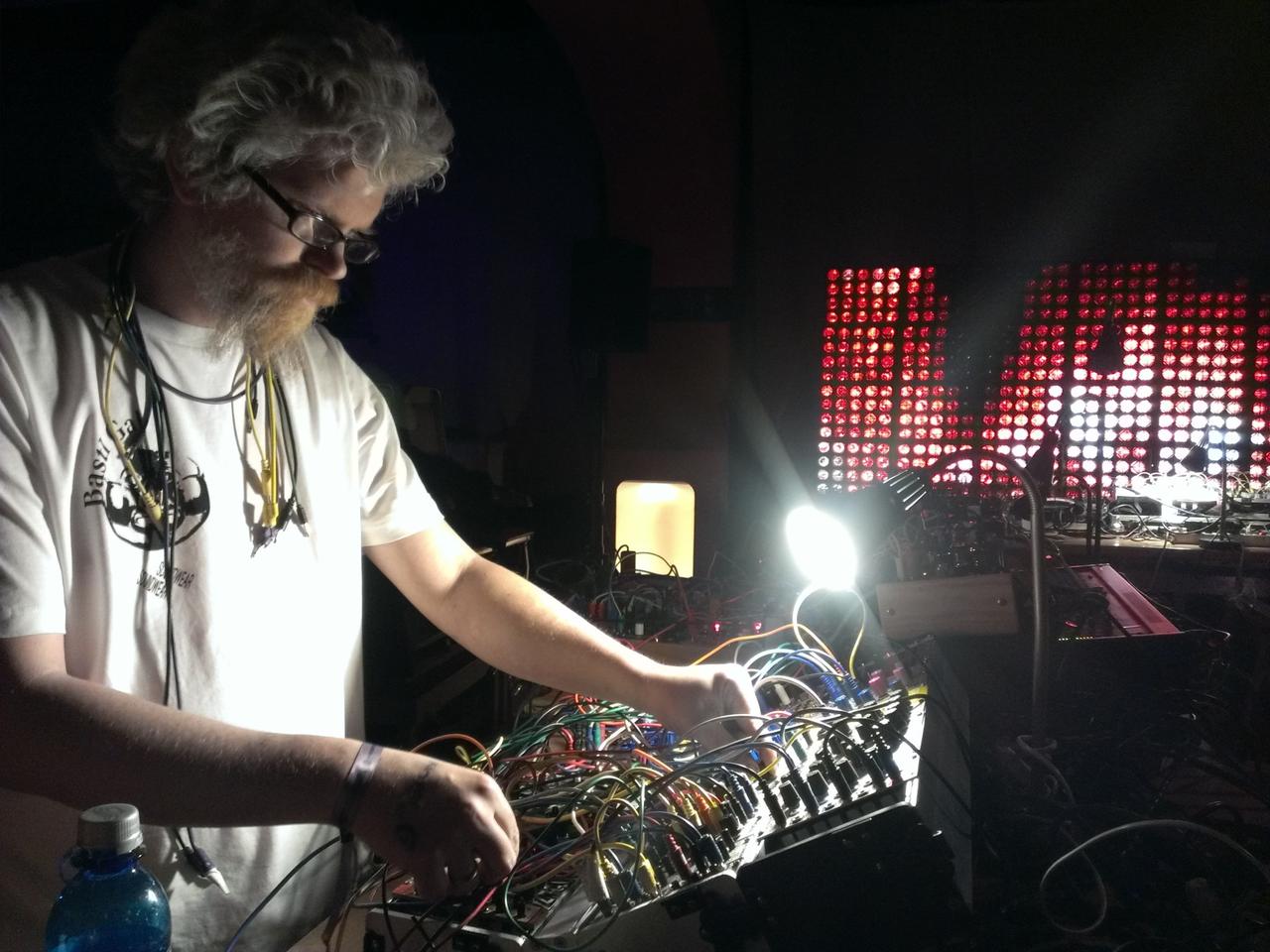 Dan, much more than the others, went into a danceable direction. Listen for yourself: 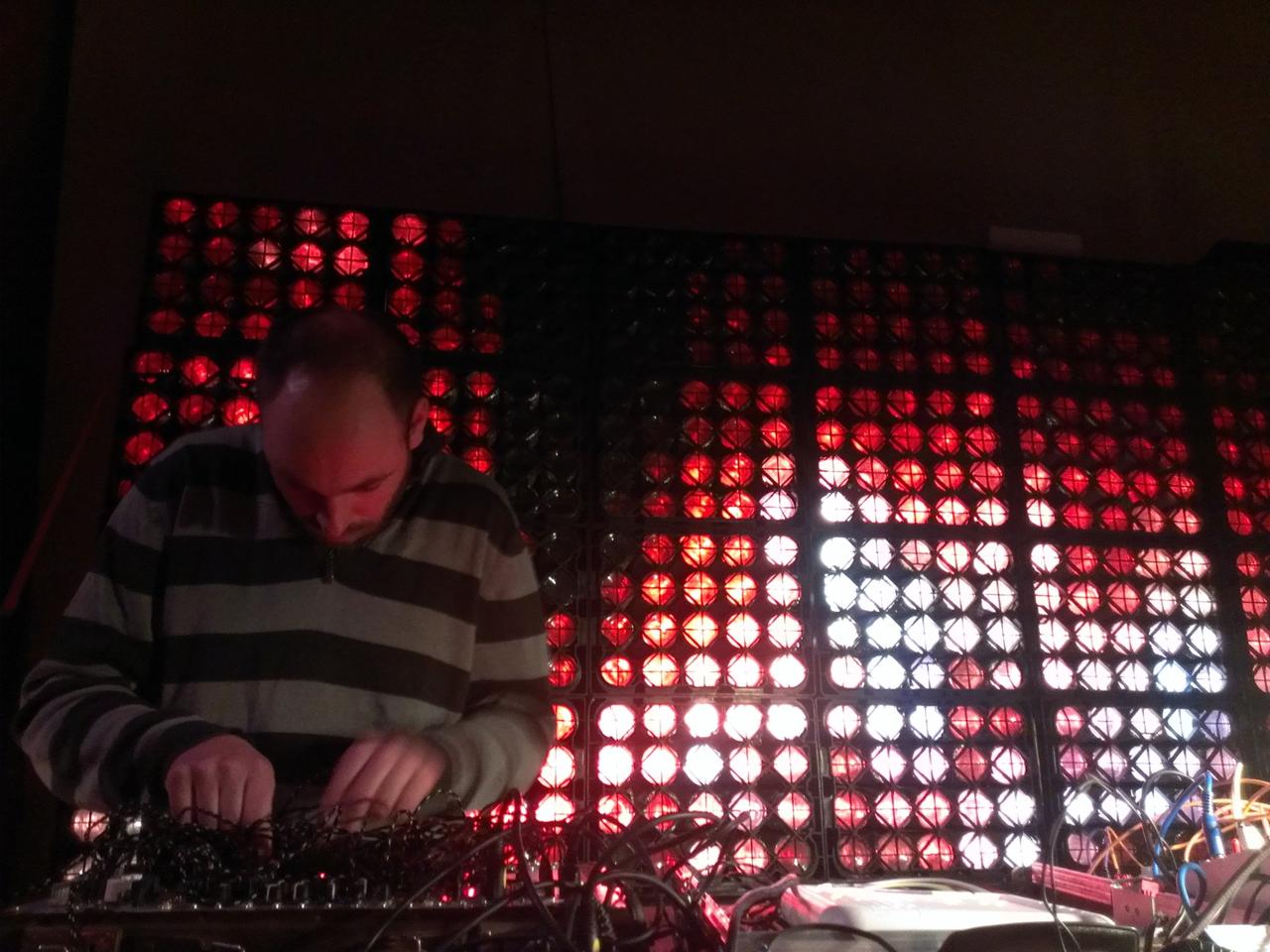 Jan Wilhelm seems to have been all partied out from Superbooth (where he apparently did techno sets all day long), as his showcase was rather experimental:
As mentioned before, Simon Schäfer (aka. der Warst) popped by, when everything was nearly over and introduced his magnificent multi-use telephone:
All in all the event prooved to be great fun, but also meant a lot of work and little sleep. Not something one organizes on a weekly basis (I hope).